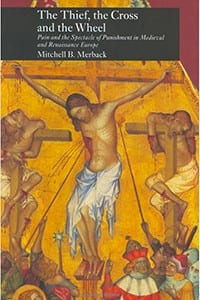 Christ’s Crucifixion is one of the most recognized images in Western culture, and it has come to stand as a universal symbol of both suffering and salvation. But often overlooked is the fact that ultimately the Crucifixion is a scene of capital punishment. Mitchell Merback reconstructs the religious, legal, and historical context of the Crucifixion and of other images of public torture. The result is a fascinating account of a time when criminal justice and religion were entirely interrelated and punishment was a visual spectacle devoured by a popular audience.

Merback compares the images of Christ’s Crucifixion with those of the two thieves who met their fate beside Jesus. In paintings by well-known Northern European masters and provincial painters alike, Merback finds the two thieves subjected to incredible cruelty, cruelty that artists could not depict in their scenes of Christ’s Crucifixion because of theological requirements. Through these representations Merback explores the ways audiences in early modern Europe understood images of physical suffering and execution. The frequently shocking works also provide a perspective from which Merback examines the live spectacle of public torture and execution and how audiences were encouraged by the Church and the State to react to the experience. Throughout, Merback traces the intricate and extraordinary connections among religious art, devotional practice, bodily pain, punishment, and judicial spectatorship.

Keenly aware of the difficulties involved in discussing images of atrocious violence but determined to make them historically comprehensible, Merback has written an informed and provocative study that reveals the rituals of medieval criminal justice and the visual experiences they engendered.