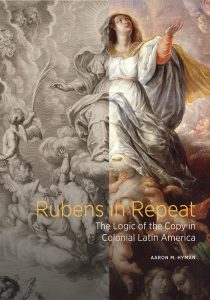 This book examines the reception in Latin America of prints designed by the Flemish artist Peter Paul Rubens, showing how colonial artists used such designs to create all manner of artworks and, in the process, forged new frameworks for artistic creativity.

Peter Paul Rubens (1577–1640) never crossed the Atlantic himself, but his impact in colonial Latin America was profound. Prints made after the Flemish artist’s designs were routinely sent from Europe to the Spanish Americas, where artists used them to make all manner of objects.

Rubens in Repeat is the first comprehensive study of this transatlantic phenomenon, despite broad recognition that it was one of the most important forces to shape the artistic landscapes of the region. Copying, particularly in colonial contexts, has traditionally held negative implications that have discouraged its serious exploration. Yet analyzing the interpretation of printed sources and recontextualizing the resulting works within period discourse and their original spaces of display allow a new critical reassessment of this broad category of art produced in colonial Latin America—art that has all too easily been dismissed as derivative and thus unworthy of sustained interest and investigation. This book takes a new approach to the paradigms of artistic authorship that emerged alongside these complex creative responses, focusing on the viceroyalties of New Spain and Peru in the seventeenth and eighteenth centuries. It argues that the use of European prints was an essential component of the very framework in which colonial artists forged ideas about what it meant to be a creator.