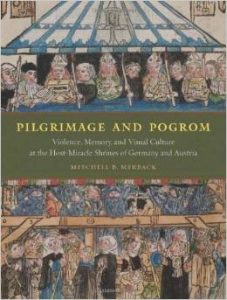 In the late Middle Ages, Europe saw the rise of one of its most virulent myths: that Jews abused the eucharistic bread as a form of anti-Christian blasphemy, causing it to bleed miraculously. The allegation fostered tensions between Christians and Jews that would explode into violence across Germany and Austria. And pilgrimage shrines were built on the sites where supposed desecrations had led to miracles or to anti-Semitic persecutions. Exploring the legends, cult forms, imagery, and architecture of these host-miracle shrines, Pilgrimage and Pogrom reveals how they not only reflected but also actively shaped Christian anti-Judaism in the two centuries before the Reformation.

Mitchell B. Merback studies surviving relics and eucharistic cult statues, painted miracle cycles and altarpieces, propaganda broadsheets, and more in an effort to explore how accusation and legend were transformed into propaganda and memory. Merback shows how persecution and violence became interdependent with normative aspects of Christian piety, from pilgrimage to prayers for the dead, infusing them with the ideals of crusade. Valiantly reconstructing the cult environments created for these sacred places, Pilgrimage and Pogrom is an illuminating look at Christian-Jewish relations in premodern Europe.