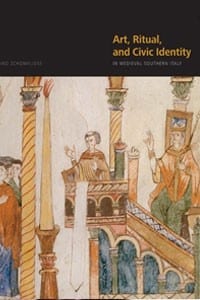 In Art, Ritual, and Civic Identity in Medieval Southern Italy, Nino Zchomelidse examines the complex and dynamic roles played by the monumental ambo, the Easter candlestick, and the liturgical scroll in southern Italy and Sicily from the second half of the tenth century, when the first such liturgical scrolls emerged, until the first decades of the fourteenth century, when the last monumental Easter candlestick was made. Through the use of these objects, the interior of the church was transformed into the place of the story of salvation, making the events of the Bible manifest. By linking rites and setting, liturgical furnishings could be used to stage a variety of biblical events, in accordance with specific feast days. Examining the interaction of liturgical performance and the ecclesiastical stage, this book explores the creation, function, and evolution of church furnishings and manuscripts.