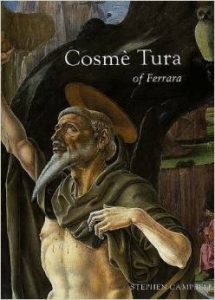 In the city of Ferrara, a major cultural and artistic center of Renaissance Italy, Cosme Tura (c. 1430-1495) came to prominence as painter to the Este court. This book offers a new and wide-ranging approach to Tura’s life and his enigmatic and stylistically idiosyncratic works. Stephen Campbell takes the career of Tura as a starting point for the investigation of such intriguing issues as the fifteenth-century artist’s role and status in both court and urban culture and the bearing these conceptions may have had on Tura’s distinctive style. Campbell also provides an account of the role of the image in Ferrara’s religious, political, and intellectual life, broadening our understanding of the Renaissance beyond traditional discussions of visual culture that focus on Rome, Florence, and Venice. The author discusses also how Tura and his contemporaries addressed local themes of ethnic, political, and religious tension in their works. Among the works by Tura that this book examines closely are a cycle of paintings of the Muses created for the Studio of Leonello d’Este in 1447; an altarpiece commissioned by the powerful Roverella family, showing the Madonna enthroned on the Tabernacle; and four organ-shutter panels for Ferrara Cathedral depicting St. George and the Princess and an Annunciation. Campbell shows how the fascinating peculiarities of Tura’s individual works resonate within the broader cultural contexts defined by the court, ecclesiastical groups, and humanist thinkers. Further, Campbell argues that Tura’s work anticipates later inventions associated with Leonardo da Vinci at the court of Milan and with Mantegna at Mantua.