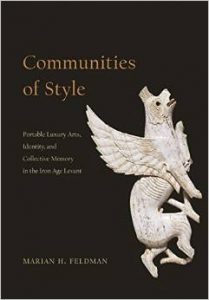 Communities of Style examines the production and circulation of portable luxury goods throughout the Levant in the early Iron Age (1200–600 BCE). In particular it focuses on how societies in flux came together around the material effects of art and style, and their role in collective memory.

Marian H. Feldman brings her dual training as an art historian and an archaeologist to bear on the networks that were essential to the movement and trade of luxury goods—particularly ivories and metal works—and how they were also central to community formation. The interest in, and relationships to, these art objects, Feldman shows, led to wide-ranging interactions and transformations both within and between communities. Ultimately, she argues, the production and movement of luxury goods in the period demands a rethinking of our very geo-cultural conception of the Levant, as well as its influence beyond what have traditionally been thought of as its borders.